MEDICATIONS AND TREATMENT OPTIONS FOR ALLERGIES 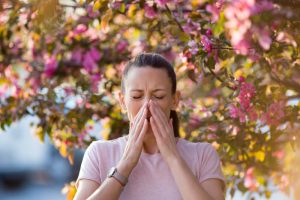 Allergies, in general, refer to the conditions that are caused due to the hypersensitivity of our immune system towards otherwise non-dangerous substances present in the environment. No matter what type of allergy it is, there are several medications available to ease the symptoms of the condition. Below is a quick look at the different medications and treatment options for allergies.

Antihistamines are the most commonly recommended medications for allergies. They are available in the form of pills, nasal sprays, liquids, and eye drops, and can be used to alleviate the symptoms of a wide range of allergic conditions like food allergies, allergic asthma, atopic dermatitis, and anaphylaxis. Antihistamines work by blocking histamine production and stopping it from binding to other receptors in the blood vessels, which can cause redness, itching, swelling, and changes in secretions.

Doctors at community healthcare centers usually prescribe antihistamines such as cetirizine, fexofenadine, levocetirizine, and loratadine to treat allergies. Sometimes, brompheniramine, chlorpheniramine, clemastine, and diphenhydramine are also recommended to patients, but these antihistamines can make you feel drowsy. Ketotifen and naphazoline-pheniramine ophthalmic eye drops can also be prescribed to relieve the redness and itchiness in the eyes.

Decongestants are prescribed to relieve congestion, usually in the nasal passage and the airway, and are often recommended along with antihistamines to treat allergies. These are also available in different forms, such as nasal sprays, eye drops, pills, or liquid. Decongestants work by shrinking the swollen tissues in the nasal canal caused because of an allergic reaction. They also reduce the inflammation of the blood vessels to relieve the symptoms of allergies, such as nasal swelling, excessive mucus secretion, congestion, and redness.

The most common decongestants prescribed to treat allergies are pseudoephedrine, oxymetazoline, and phenylephrine. Sometimes, an allergy doctor may also recommend eye drops having potassium chloride and tetrahydrozoline hydrochloride to ease the symptoms. Note that it is advised to use nasal spray and eye drop decongestants for only a couple of days, as long-term usage of such medications can make the symptoms worse. Pills and liquid decongestants can be taken for as long as needed, but only after due consultation with the doctor at a nearby community healthcare center.

Combination allergy medicines are those that contain both antihistamine and decongestant content to alleviate multiple symptoms of allergies. These medications would work not only by blocking the production of histamine and its effects and also stopping the mast cells from producing any other allergy-inducing chemicals.

Steroids or corticosteroids are prescribed to reduce the inflammation and swelling caused due to an allergic reaction. These medications are usually recommended to treat symptoms like nasal stuffiness, itchiness, sneezing, and runny nose. Steroids come in various forms, such as pills, nasal sprays, eye drops, liquids, and creams, and can be used to ease the symptoms of different types of allergies including asthma, skin allergies, allergic conjunctivitis, etc.

The most commonly prescribed steroids for allergies include beclomethasone, ciclesonide, fluticasone furoate, budesonide, triamcinolone, and mometasone. Dexamethasone ophthalmic and loteprednol ophthalmic are also recommended to deal with the irritation and redness in the eyes, whereas prednisone can be used to treat other symptoms of an allergic reaction.

It is seen that steroids can lead to many types of side effects, such as weight gain, high blood pressure, fluid retention, diabetes, cataracts in the eyes, fungal infections in the mouth, cough, muscle weakness, bone-thinning osteoporosis, etc. These side effects are mostly associated with the long-term use of corticosteroids, which is required to treat the allergic symptoms fully.

Mast cell stabilizers are recommended to treat inflammation and swelling caused due to allergic reactions. They are available as eye drops and nasal sprays which are mainly used to ease the symptoms of allergic conjunctivitis and nasal allergies. Mast cell stabilizers also work by stopping histamine production in the body and can have anti-inflammatory effects to deal with the symptoms more efficiently as well.

The most common examples of mast cell stabilizers include cromolyn sodium, lodoxamide-tromethamine, nedocromil, and pemirolast. Note that mast cell stabilizers are prescribed to treat mild to moderate conditions only, as they can have some side effects like throat irritation, skin rashes, and cough. Sometimes, these medications can also cause stinging, burning, or blurred vision in the eye.