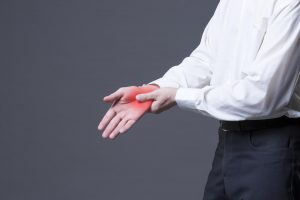 Carpal tunnel syndrome is a condition where you feel numbness, weakness, or tingling in your hands. Although it might not sound like a severe health issue, most primary care doctors recommend addressing the condition if it is recurrent, because it can lead to many complications if left untreated.

The condition is caused when excessive pressure is exerted on the median nerve that runs through the arm to the passage in the wrist known as the carpal tunnel. This median nerve controls the movement of the thumb and the fingers except for the little finger. When the carpal tunnel becomes narrowed, usually because of swelling and inflammation of the muscles, the median nerve is squeezed and blocked, which leads to numbness and weakness in the hand(s).

Carpal tunnel syndrome is commonly seen in people with conditions like rheumatoid arthritis, hypothyroidism, and diabetes and is best seen by a local rheumatologist. It is more frequent in obese people and can happen due to repetitive motion that applies pressure to the wrist as well. Besides, carpal tunnel syndrome can be recurrent in pregnant women and can get worse with time if not treated.

Studies say that women are thrice more likely to get the condition than men. This is because the carpal tunnel in the wrists of women is usually much smaller than that in men. Sometimes, the condition can heal on its own after a couple of weeks. However, if the tingling, numbness, and pain in the fingers is severe and lasts more than a fortnight, you should contact the nearest community healthcare center and take appropriate measures to treat the condition.

Although it is not that common, women suffering from amyloidosis, a disease that causes proteins to collect in the organs, are also more prone to carpal tunnel syndrome. At times, using birth control pills can also lead to the condition.

The most common symptoms of carpal tunnel syndrome include burning, tingling, numbness, and pain in the thumb and any of the fingers. The symptoms are mild in the beginning, but gradually move up to the forearm, making it more noticeable. Oftentimes, the symptoms start at nighttime because most people sleep with their wrists bent, which puts more pressure on the median nerve. The condition, however, would make the patient wake up during the night to shake his/her hands.