COMPLICATIONS BROUGHT ON BY CELIAC DISEASE 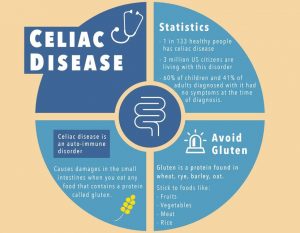 Celiac disease is a condition that prevents people from eating gluten. If a person who has it eats barley, wheat, or rye, it triggers an immune response that hits the small intestine. The reaction caused by this can cause severe damage to the inner lining of the intestine over time, as well as leave the affected person unable to absorb the nutrients they require. It is usually also accompanied by fatigue, diarrhea, bloating, anemia, and weight loss. The mal-absorption by itself is a serious problem, especially in children.

Celiac disease has no cure, but removing gluten-products from the diet is often enough to make sure the intestine heals, and that the symptoms mentioned above stay under control.

Celiac disease exhibits varying symptoms in adults and children. In the former, you mostly see fatigue, diarrhea, and weight loss, and sometimes bloating, gas, nausea, abdominal pain, vomiting, and constipation. More than half also show signs which do not relate to the digestive system, such as the following.

Children under 2 years of age would show the following symptoms when best with celiac disease.

It is important to see a doctor at one of the nearby low income clinics of you have been experiencing digestive discomfort or diarrhea for over two weeks. Never start a gluten-free diet without having done this first, or even cut down on your current gluten intake.

Celiac disease often gets passed down in families, which means anyone who has a family history of the condition is well served by getting tested at an affordable health clinic. While doing that, also check into the risk factors such as Type 1 diabetes.

Celiac disease is caused by the interaction of genes with gluten intake and environmental factors, although no precise cause has been pinned down as yet. It can be triggered for the first time after surgery, childbirth, pregnancy, severe emotional stress, and viral infection.

The immune system reacts to gluten present in food and causes damage to the villi present in along the small intestine’s walls. These small hair-like projections normally perform the function of absorbing nutrients from the food passing through, but when damaged, they fail to do what they are supposed to. Consequently, the person suffers from malnutrition.

There are some gene variations, which supposedly drive up risk of developing celiac disease, but additional factors are also involved. In Western countries, the rate of this disease stands at 1 percent, and is most common among Caucasians.

Anyone can develop celiac disease, but it does show itself to be a likely situation when people have the following.

The only way to be sure you are safe from these effects is to get to a doctor as soon as the symptoms start looking like the beginning of something serious.