WHAT IS EMPHYSEMA AND HOW IS IT CAUSED? 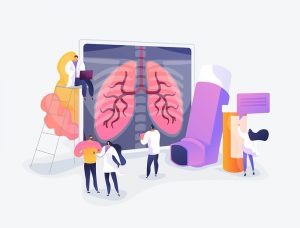 Emphysema is one of the main types of chronic obstructive pulmonary disease, also known as COPD. The chronic lung disease is reported to be the in the top 5 leading causes of fatalities in the US as it blocks the airflow to and from the lungs. The CDC reports that around 15 million people in the US are living with emphysema or another type of COPD. Some of them do not even know that they have the condition.

How is Emphysema Caused?

There are two main causes of emphysema – smoking and AAT deficiency. In most of the cases, smoking tobacco is found to be the main cause of the lung disease. It is not clear how smoking cigarettes lead to the damages of the air sac linings. However, studies have established that regular smokers are around 6 times more likely to be diagnosed with emphysema when compared to non-smokers. It is also seen that quitting smoking may help to slow down the progression of the lung disease in some cases.

AAT or Alpha-1 antitrypsin deficiency is the other main cause of emphysema, especially among children and young adults. AAT is a protein which is found in the blood, and the main function of AAT is to prevent white blood cells from attacking the normal tissues in the body. To help protect your family from AAT and similar issues, visit your family doctor regularly. Studies say that around 100,000 people in the US have an inborn condition that causes AAT deficiency in their body. As there is not enough supply of Alpha-1 antitrypsin protein in the blood, the white blood cells attack and damage the tissues in the lungs and lead to emphysema.

Secondhand smoke is also seen to be a possible cause of emphysema. Passive smoking is known to cause many serious conditions in non-smokers and it can lead to severe lung damage over time if they are exposed to high amounts of secondhand smoke. Some studies say that air pollution can also cause emphysema, but more research is required to confirm the findings.

There is no known cure for emphysema yet. If you have AAT deficiency, the condition can become even worse if you smoke. In some cases, it may also lead to liver problems. Therefore, it is essential to consult with a doctor as soon as you notice any symptoms of the disease and treat it accordingly.