AN OVERVIEW OF POST-TRAUMATIC STRESS DISORDER AND ITS SYMPTOMS 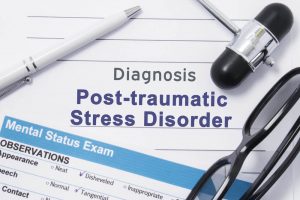 Post-traumatic stress disorder (PTSD) is a state of trauma a person feels after facing an accident, domestic violence, sexual abuse, a natural disaster, etc. The mental disorder may occur if one bears witness to or faces a traumatic event in life. Those who struggle with PTSD symptoms feel the stress persistently as past memories, or as a sense of déjà vu.

It’s quite normal to feel somewhat lost following a traumatic event that induces stress. In fact, most people feel anxious about the future, a touch sad, or even disconnected from the society. However, if the trauma keeps lingering and you feel that you are stuck in a world of flashback, it is likely you are suffering from post-traumatic stress disorder.

In a general sense, PTSD is a condition that affects ten percent women in a lifetime, with one-third of traumatic episodes tending to last over half a decade. It is more likely to affect women than men. PTSD patients show behavioral changes to go with mood swings and hence may revert to substance abuse that often leads them to rehabilitation centers. PTSD patients rely on alcoholic substances or even drugs to escape varying moods or stress. This is what may lead patients to substance abuse disorder.

While relying on said substances may make the person feel that they are recovering from painful memories, it will only aggravate PTSD symptoms. This may mandate a rehab sooner rather than later. Even pregnant women suffer from postpartum posttraumatic stress disorder after childbirth. Such types of postpartum depression in women occur due to a perceived trauma or a real trauma, which they face during delivery or following childbirth.

Prolonged exposure therapy is an effective treatment option for PTSD. Such psychotherapy needs compliance from the part of the patient or following the medical advice of mental health professionals. PTSD treatment is all about helping patients understand symptoms and then cope with it, which may even extend beyond therapy sessions.

If early symptoms persist over four weeks, talk about your trauma to a psychiatrist or a psychologist to find out if what you suffer from is PTSD. With constant monitoring in a caring or homely atmosphere, PTSD patients can recoup. Talking to survivors of similar traumas can play a key role in recovery from post-traumatic stress disorder.