EVERYTHING YOU NEED TO KNOW ABOUT PSORIATIC ARTHRITIS 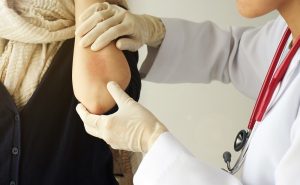 Psoriatic arthritis is a type of autoimmune disease that causes a reddish, scaly rash on the skin, usually on the elbows, ankles, knees, feet, and hands. The inflammatory condition happens when the immune system starts attacking the healthy cells of the body due to malfunctioning. As psoriatic arthritis affects the areas near the joints, it can cause severe pain, swelling, and stiffness of the tissues. Moreover, if the condition is not treated in time, it can lead to irreparable damages to the skin and joints.

There are two main types of psoriatic arthritis: oligoarticular, where the disorder is mild and affects less than four joints, and polyarticular, where the condition is severe and affects more than four joints in the body. Psoriatic arthritis is also categorized into different types based on the body part it affects and the complications it leads to.

Although there is not much research to explain what causes psoriatic arthritis, most healthcare experts believe that the condition happens due to a genetic disorder or infection. Besides, it is also seen that psoriatic arthritis affects around 40% of people who have a family history of the condition. The age and sex do not matter much here; the autoimmune condition is seen to affect both men and women in the US, somewhere between the age of 30 and 50.

You should consult a rheumatoid doctor at the nearby community healthcare center as soon as you notice any early symptoms of psoriatic arthritis. Remember that the condition can aggravate with time and worsen to a state where it totally damages the tissues and ligaments in the affected area. Therefore, timely action is very important to treat the condition effectively. Your doctor would check your medical history and run a few diagnostic tests to determine the severity of the condition and then prepare the best treatment plan for you.

If the condition were in its mild stages, the doctor would recommend non-steroidal anti-inflammatory drugs such as ibuprofen and naproxen. These medicines would help to ease the pain and inflammation of the joints as well as reduce the redness and rashes on the skin. In addition, the doctor might also suggest disease-modifying antirheumatic drugs to slow down the progression of the disorder as well as to reduce tissue damage.

In some cases, the doctor might recommend immunosuppressant drugs to address the pain and inflammation in the joints of the hands and legs, as well as to stop the condition from getting worse. These are usually advised to patients who cannot take disease-modifying antirheumatic drugs. At the same time, if the patient cannot take immunosuppressant drugs, or it fails to work, the doctor would prescribe biologic medications or enzyme inhibitors to block a protein that leads to inflammation of the tissues.

If the condition has already reached a stage where pain medications and anti-inflammatory drugs would not do any good to the patient, the doctor might recommend surgery to remove the damaged tissues or joints. However, this is advised as the last resort when all other treatment options fail.