AN OUTLINE OF NON-ALLERGIC RHINITIS PT 1 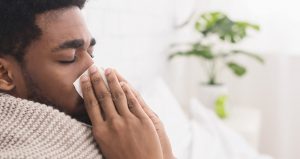 Non-allergic rhinitis comprises a condition where the affected person experiences chronic sneezing or a drippy, congested nose for no easily discernible reason. It shows symptoms which are alike those that come on with hay fever, but no allergic reaction is evident at the beginning, or even further on. Affected people include adults as well as children, but the condition is seen to be more common in people over 20 years of age.

The triggers can vary, and they cover everything from irritants present in the air, weather changes, chronic health conditions, and some medications and foods. Nonallergic rhinitis can be diagnosed after all allergic causes are ruled out, and that generally requires blood tests.

People with nonallergic rhinitis would see symptoms appear, disappear, and reappear at random times with changes in weather as well as in other conditions. Some symptoms would stay constant, while others would only last a short while. Some of the main ones include the following.

Nonallergic rhinitis is rarely seen to cause itchiness in the eyes, nose, or throat the way hay fever does. Seeing a doctor becomes vital to well-being if one or more of the following things happen.

Nonallergic rhinitis has no exact known cause as of yet, but experts agree that it occurs at those times when the blood vessels present in the nose expand, and fill the lining in the nose with fluid and blood. There can be many causes for this, which may include hyperresponsiveness in the nerve endings present in that area, a lot like how a person’s lungs act out during asthma. Regardless of the trigger, the result you get can include swelling in the nasal membranes, excessive mucus, and congestion.

Many things are currently known to trigger nonallergic rhinitis in most people, some of which bring about short-term symptoms, while others result in more chronic issues. In the next article we will cover the main triggers of nonallergic rhinitis as well as risk factors that may make you more susceptible to non-allergic rhinitis and which causes your family doctor may identify.