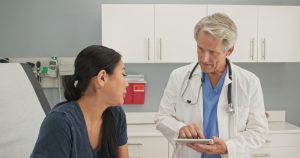 Mammary duct ectasia is a condition that occurs when the milk duct right under the nipple widens and thickens the tube and walls with fluid. The milk duct can also be blocked because of a sticky substance, so this particular condition has no specific symptoms. Nipple discharges, tenderness of breasts, or inflammation due to the clogged duct are the standard visible signs of this condition.

This mammary duct problem mostly happens in women who fall in the age group of 45 – 55 years when perimenopause happens. However, it can also occur after menopause in some women which would be best identified by a women’s healthcare clinic. The condition usually heals on its own without treatment, but it can sometimes require medication or surgery to remove an overly coagulated milk duct. Moreover, mammary duct ectasia and periductal mastisi are not at all related to breast cancer.

Tenderness, redness, swelling, and inverted nipple(s) are the most common symptoms of this problem. Lumps or thickness is often found near the breasts along with fever. Moreover, a grayish or whitish liquid is also commonly secreted. If the symptoms persist for a long time, then it is time for you to consult a local primary doctor.

The female breasts are made up of several connective tissues that have a network of milk ducts, which help to deliver milk to the nipple. Every duct is responsible for carrying a specific amount of milk inside the breast. So, mammary duct ectasia usually happens when this level is disturbed in any of the milk ducts below the nipple.

Aging and involution process can be one of the primary reasons for this condition that leads to widening and blocking of the milk ducts. Besides this, nipple inversion can contribute to inflammation and infection of the milk ducts, thereby leading to mammary duct ectasia.

This is a widespread problem in women who are about to experience their menopause or have experienced it recently. Reports also say that the disorder is more common in women who smoke cigarettes or consume an excessive amount of alcohol.

Experts have found the following difficulties experienced by patients due to mammary duct ectasia:

For more information, check out Part 2 of this overview of mammary duct ectasia.