AN OVERVIEW OF PHENYLKETONURIA DISORDER PT 1 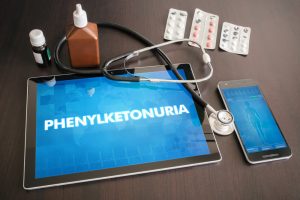 Human beings — especially women and children — are prone to a number of health conditions. This is because of their genetic structure as well as the impact of many social, environmental, and biological factors. One of the rare health issues seen in people and especially babies, as a result of genetic mutation, is phenylketonuria or PKU.

PKU is a rare inherited metabolic disorder in which a faulty gene would trigger the production of an amino acid called phenylalanine in the body of the sufferer. Note that this faulty gene is responsible for breaking down phenylalanine and as a result, the disorder would cause severe phenylalanine buildup in the body of the affected person. This mainly happens when the person with phenylketonuria disorder consumes food which is rich in protein such as aspartame. This may gradually lead to a number of serious health issues going forward. Usually, babies, children, and adults are prone to developing phenylketonuria disorder making the general population susceptible.

The only way to tackle this is to follow a strict diet which limits intake of protein-rich food in place of other options. Furthermore, it is mandatory in most countries in the world including the United States to conduct a test right after the birth of a baby, in order to diagnose phenylketonuria. It is to be noted that detecting the health condition at its early stage would let you tackle this to a great extent.

In case you couldn’t perform tests to diagnose phenylketonuria after the birth of your baby, you may look for certain signs that indicate the presence of this health condition in your newborn. Actually, newborns suffering from PKU will not show any symptoms of the disease for the first few months. Some symptoms start showing up within a few months after birth and include the following.

The presence of these symptoms in babies may range from trivial to severe, depending on the type of PKU. It is worth noting that there are two types of PKU.