EVERYTHING YOU NEED TO KNOW ABOUT GLUTEN SENSITIVITY AND ACNE 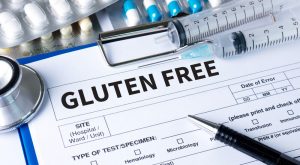 Acne is a very common inflammatory condition that can be caused due to various factors in women of all ages. Although the exact factors that trigger or worsen the condition are not always clear, most of the cases are linked to the diet of the person. In that, gluten sensitivity is often considered to be a prime triggering factor for acne breakouts.

Gluten is a group of proteins, which occur naturally in many types of grains such as wheat, barley, and rye. It is also found in triticale, which is a mixture of rye and wheat. Most women think of pasta and bread when they hear of the word “gluten”, maybe because of its elastic nature that relates to a kind of “glue” that holds such foods together. However, gluten from wheat can be found in a lot of other food products as well, such as in soups and salad dressings.

Some of the grains that are naturally free of gluten, such as rice and oats, can also be contaminated with gluten-rich grains. That is why it is recommended to check the labeling on the food product carefully to ensure that it is actually gluten-free. Note that gluten by itself is not a harmful protein unless you are sensitive to gluten or have celiac disease.

Normally, the intestines in our body break down gluten into a byproduct called gliadin. Yet a few factors like a genetic predisposition can create antibodies to the gliadin protein that can lead to the developing of celiac disease symptoms. In case of celiac disease as well as Non-Celiac Gluten Sensitivity (NCGS), when the person consumes gluten-containing food, he/she would experience frequent headaches, excessive fatigue, and gastrointestinal problems such as abdominal pain, constipation, and diarrhea. In some patients, it may also lead to rashes on the skin.

Celiac disease is an autoimmune disease, wherein the person having the condition finds it difficult to digest gluten. In severe cases, it can even lead to damages to the walls of the small intestine. Therefore, patients experiencing the symptoms of celiac disease and NCGS are recommended to avoid all kinds of food that contain gluten content.

It is to be noted that wheat allergy and gluten sensitivity can also happen with or without celiac disease or NCGS. The condition can also lead to gastrointestinal symptoms as well as skin rashes and hives. In severe cases, wheat allergies can lead to breathing difficulties as well. As that would require immediate medical attention, it is recommended to see a doctor at the nearest community healthcare center as soon as the early symptoms are noticed.

There is no clinical evidence that supports following a gluten-free diet to cure acne. In fact, there is not much proof to state that gluten triggers acne breakouts in the first place. However, gluten sensitivity and celiac disease are found to be associated with many other skin conditions.

While some foods can potentially increase the risk of skin conditions, there is not much evidence to establish any link between acne and the diet of the person. Still, those who are prone to skin problems should avoid foods that have high glycemic content, such as white rice and white potatoes. Similarly, consuming dairy products and whey protein supplements can also lead to the onset of acne in some people. A family y