AN OVERVIEW OF ADENOIDECTOMY AND TONSILLECTOMY IN CHILDREN 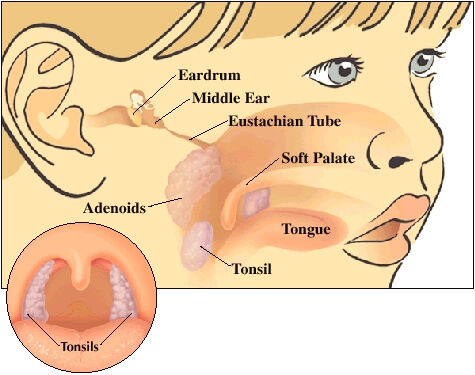 Tonsils are round pieces of tissue located at the back of the mouth, on both sides of the throat. These are meant to fight infections by making antibodies. Tonsillitis is a condition that occurs in children when the tonsils are inflamed. You can see the tonsils with a flashlight.

Adenoids are much similar to tonsils and are made up of lymph tissue. They are made of lymph tissue and are placed above the soft nasopharynx (the soft roof of the mouth). They also help fight infections and can lead to problems when they are infected or enlarged. However, you will not be able to see adenoids by looking into the throat or nose of the child as in tonsillitis.

As said, tonsillitis is the condition when the tonsils are inflamed from infection. The most common symptoms of the problem are:

Some of the patients may be referred to an ENT surgeon to get the tonsils and adenoids removed. The surgical procedure to remove tonsils is called tonsillectomy and that to remove adenoids is called adenoidectomy. Tonsils and adenoids can be removed at the same time if necessary. After the surgery, you need to increase the fluid intake, take the pain medication as prescribed, and should not indulge in heavy physical activities.

Risks of Adenoidectomy and Tonsillectomy

Get in touch with our low income clinics to learn more about the ill-effects of adenoiditis and tonsillitis, as well as the need of surgical procedure to treat the condition.