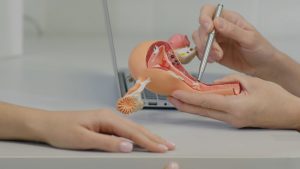 Endometrial cancer is a very common type of cancer that affects the uterus of the patient. Also known as uterine cancer, it starts in the endometrium of the uterus, leading to frequent vaginal bleeding and pain in the pelvic region. Usually, the abnormal growth of cells in the uterus is diagnosed in the very early stages, and removal of the uterus surgically in due time can help to totally cure endometrial cancer.

The most common symptom hinting the onset of endometrial cancer is abnormal vaginal bleeding, such as bleeding after menopause or between the usual menstrual periods. Apart from that, women will also see a watery or blood-stained discharge from the vagina as soon as the lining of the uterus is infected. Pain during intercourse is also a common symptom of endometrial cancer, and it is recommended to see a doctor as soon as any of the said signs worry you.

Not much is known about the actual causes of endometrial cancer; however, experts say that some kind of genetic mutation in the cells lining the uterus turns the healthy cells into anomalous ones. Normally, healthy cells grow at a definite pace and die at a specific age. However, abnormal cells can multiply without any set rule, and they do not die at any particular time either. These anomalous cells accumulate inside the uterus to form a tumor, gradually attacking nearby tissues and cells, and thereby preventing them from performing their normal functions. Sometimes, a tumor can separate from the original batch and form somewhere else in the body as well.

The Risk Factors of Endometrial Cancer

There are many factors, which can increase the risk of endometrial cancer in women. For instance, anything that upsets the balance of estrogen and progesterone in the body (typically increasing the estrogen level without making any changes to the progesterone level) can amplify the risk of uterine cancer. It can be a disease or a complication, or simply taking hormone supplements after menopause that boosts the amount of estrogen but does not do any good to the amount of progesterone. Similarly, irregular ovulation patterns experienced by obese and diabetic women can also increase the risk of uterine cancer at times, while polycystic ovary syndrome can also be a potential contributor.

Starting menstruation before the age of 12 or getting to menopause at a later age than 55 can also raise the risk of endometrial cancer.