EVERYTHING YOU NEED TO KNOW ABOUT RAYNAUD’S DISEASE 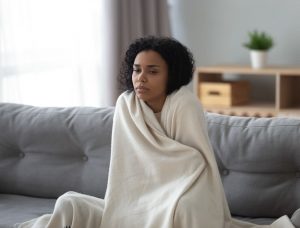 Raynaud’s disease is a condition wherein specific areas of the body, especially the fingers and toes, feel cold and numb. This can happen due to a drop in temperature or stress. The condition makes the smaller arteries in these areas to become narrow, which limits the supply of blood to the fingers and toes, thus leading to numbness.

Research shows that women are more likely to develop Raynaud’s disease. The condition is particularly common in people who live in colder regions. While Raynaud’s syndrome may not be a cause of concern for most people, it can negatively affect the quality of life. In severe cases, the low blood circulation caused by the condition can even lead to tissue damage. It is seen that Raynaud’s disease can even block an artery completely if left unattended for long, causing skin ulcers and dead tissues.

Signs and Symptoms of Raynaud’s Syndrome

The symptoms of secondary Raynaud’s usually appear around the age of 35 – 40, which is later than that seen in people with primary Raynaud’s. The symptoms of the condition vary depending upon its severity. Yet in general, the vascular disorder causes irregular interruption of blood flow to the extremities of the body, which leads to numbness for some time in the affected area.

In most cases, the patient will experience cold fingers or toes and color changes in the skin when exposed to cold temperatures. This could also happen due to extreme stress. The patient may also experience stinging pain or a prickly feeling upon warming or when using stress relief measures.

It is seen that the skin in the affected areas in the body appears white first during a Raynaud’s syndrome event. Gradually, the skin turns blue and starts feeling cold and numb. When the area is exposed to warmth and the blood circulation improves, the skin starts appearing red with a tingle or swell.

Typically, Raynaud’s disease is seen to affect the fingers and toes of the patient, but it can affect other parts of the body in some cases. This may include the nose, lips, ears, and nipples. Usually, an attack lasts for around 10 – 15 minutes until the blood flow becomes normal again.