THE SYMPTOMS AND CAUSES OF ENCEPHALITIS 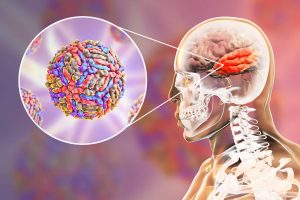 Encephalitis is a condition that causes inflammation of the brain. It is commonly caused because of a viral infection and may or may not exhibit any symptoms. In some cases, the viral infection can lead to seizures, confused thinking, and/or problems with the senses or movement, while it can be life-threatening in some rare cases as well. In fact, it is very difficult to predict how encephalitis would affect an individual, which is why it is required to consult with a doctor at the nearest community healthcare center for timely diagnosis and adequate treatment.

Symptoms and Causes of Encephalitis

In the majority of the cases, encephalitis causes mild flu-like symptoms such as headache, fever, nausea, joint pain, muscle aching, fatigue, etc. In severe cases, it can cause agitation, confusion, or hallucinations, seizures, paralysis or loss of sensation in certain body parts or the face, muscle weakness, problems with hearing or speech, loss of consciousness, etc. In newborns and children, the condition can also have symptoms, such as bulging on the skull, body stiffness, vomiting, loss of appetite or poor feeding, irritability, etc. As the symptoms might vary from person to person, it is advised to see a doctor as soon as you notice any of the above-mentioned signs of the condition.

The former occurs when the virus infection affects the brain functions directly. It might be concentrated in a single area or spread all over the brain. The latter condition is caused when the immune system incorrectly reacts to an infection somewhere else in the body. When that happens, the defective immune system starts attacking the healthy cells in the brain instead of attacking the cells that caused the infection. Secondary encephalitis infection is also known as post-infection encephalitis, and it usually occurs 2 to 3 weeks after the early encephalitis infection.

The common viruses that can lead to encephalitis infection include:

Other than these, some of the common childhood infections, such as mumps, measles or rubeola, and German measles or rubella, can also lead to encephalitis infection. Note that anyone can be affected by the condition, but it is more common in young children and older adults. Besides, people with a relatively weaker immune system are also at a higher risk of encephalitis, especially those who take immune-suppressing drugs to deal with any other condition like HIV/AIDS.

Encephalitis can lead to a wide range of health issues, and its effect varies depending upon the age of the patient, the cause of the infection, the severity of the condition, and the time between the onset of the infection and starting the treatment. In most of the mild to moderate cases, the patient would recover within a couple of weeks and have no long-term effects. However, in severe cases, it can lead to complications such as brain damage, which can lead to coma or death, persistent fatigue and weakness, personality disorder, memory and cognitive problems, paralysis, hearing loss, vision defects, and speech impairments.

Experts at community healthcare centers recommend taking all the precautions necessary to avoid exposure to virus infection that could lead to encephalitis. It is advised to practice good hygiene, avoid sharing food and utensils, and getting vaccinations in time to prevent falling prey to the condition. It is also recommended to minimize exposure to mosquitoes and ticks by using mosquito repellents and insecticides as approved by the Environmental Protection Agency.