HOW ULTRASOUND SCAN DETERMINES THE FETAL CONDITION DURING PREGNANCY 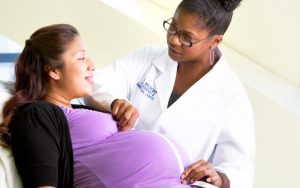 A prenatal ultrasound scan is a commonly used technique in diagnosis that utilizes high-frequency sound waves to obtain an image of the fetus. An ultrasound scan is mostly used during pregnancies for evaluating the development of the fetus, detect multiple pregnancies, and to identify any abnormalities in the fetal growth. The results obtained from this scan will assist the medical professionals to manage and provide appropriate care for the fetus.

An ultrasound scan is the most sought over method during pregnancy since it is a non-invasive and painless procedure, which is perfectly safe for the mother and fetus. It can provide images of the fetus, amniotic sac, placenta, and ovaries. However, any abnormalities that are detected through the ultrasound test will result in carrying out further tests such as amniocentesis and chorionic villus sampling for verifying the diagnosis.

The process of ultrasound scanning involves using a handheld scanner over the abdomen to obtain a two-dimensional image of the inside of the body. The sound waves by the scanner produce echoes while passing through the internal areas of the body, which are then converted into images on a monitor.

Below is a brief overview on the ultrasound scanning done during various periods of pregnancy.

First Trimester – An ultrasound scan carried out during the initial three months of pregnancy helps to verify the development of the embryo inside the womb of the mother. It is also used for determining the number of embryos and in ascertaining the gestational age and the due date of the baby.

Second Trimester – The ultrasound scan done during 18 to 20 weeks of pregnancy helps in analyzing the development of the fetal structures such as limbs, spine, internal organs, and brain. During this period, the size and location of the fetus can also be determined through the ultrasound scan.

Third Trimester – An ultrasound scanning carried out after 30 weeks of pregnancy helps to confirm the normal growth of the fetus. During this phase, the placental location is also determined to find out if it is blocking the cervix.